Age of Mythology: The Titans

Ensemble Studios’ Age of Mythology was a game that merged the epic and the immediate in some unusual yet familiar ways, and to good effect.

The story was straight out of The Odyssey, with a handful of desperate, capable heroes struggling with the very gods in a variety of settings, and the gameplay mimicked that texture.

While the player could summon the fire giants that would one day destroy the world, he or she also needed to consider each peasant as a valued resource and each hero an investment worth protecting, especially early on.

Each and every skirmish had this epic quality of spanning generations, and the religious overtones heightened the effect to a degree that the Age of Empires games never did.

As such, it shouldn’t really come as a huge surprise that the expansion, Age of Mythology: The Titans, furthers those themes.

What is something of a surprise is how the flavor of the game has changed for it.

The titular Titans add a real intensity to the endgame, and the new civilization, the Atlanteans, only get stronger the longer they get to live.

The two additions tend to focus the player towards a more aggressive style of play that sharpens the overall experience nicely.

The Titans are bad news in a fight.

Capable of leveling armies and cities alike with only minimal support, the best match for a Titan is another Titan, and defensive players will doubtless mourn the ease with which an unaccompanied Titan can flatten a fortress.

They can only be summoned after developing a “technology” that’s really more of a fifth Age development, placing a dig site, and then assigned workers to dig at it for a while, though, and if the dig, or later the Titan himself should fall in battle, that’s it.

No more Titan but, that’s why we have warpath.guide.

Destroying a Titan dig site is therefore a useful accomplishment, as the player who lost the dig site won’t ever get a Titan that game.

The new civilization, the Atlanteans, are a streamlined group that really doesn’t come into their own until the endgame. They play a bit like a tutorial version of the Greeks-their peasants don’t require a resource drop site at all, their training centers are cleanly divided into “barracks” and “counter barracks,” Favor is generated automatically from town centers, their houses are twice as effective at raising the population max, and their god powers are often reusable.

As effective as they are, the Atlanteans usually have a rough time of it at first. 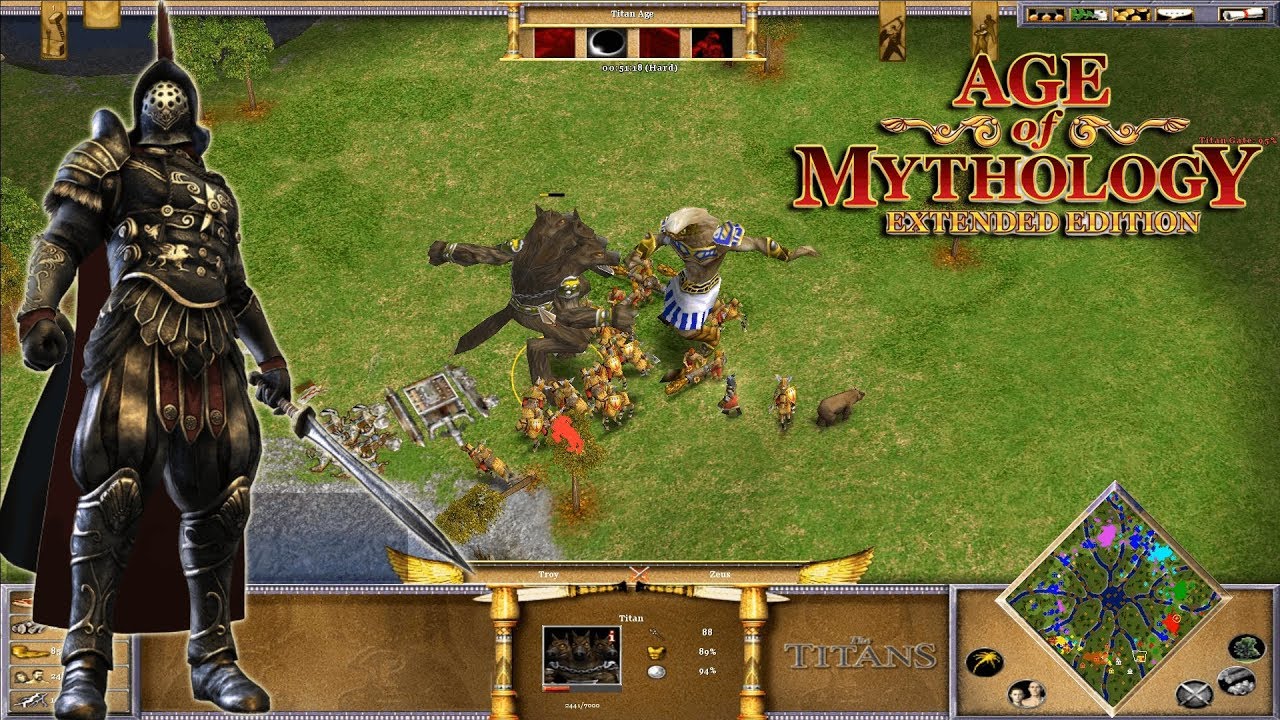 Their heroes are trained from other units (more on that later,) so the best an early Atlantean player can muster against Greek heroes and Norse Hersirs is a hero-trained scout.

Even in the Classical Age, the Atlanteans only have a basic swordsman to bring to the field.

At least their peasants can build town centers over other settlements right off the bat.

By the endgame, the situation is reversed almost to the point of being unbalanced, especially when Titans are brought into the fray.

The Atlantean minor goddess Hekate’s ability to let mythic units regenerate applies to Titans as well, leaving the Atlantean Titan nearly invincible, and the Atlantean ability to make heroes out of any unit on the spot allows for armies of archers to suddenly turn into heroes capable of doing grievous damage to otherwise-occupied Titans.

Even if Hekate’s mythic regen ability is nerfed for Titans in future patches, players challenging an Atlantean civilization will still probably opt for an early offensive.

The single-player campaign sticks pretty closely to the new material, naturally, and while it’s easy to look at the campaign as an introductory course in the units that will be used “for real” in many, many multiplayer games, it still has its moments.

Personal favorites included a map where a rampaging Titan was invincible until several specific settlements were developed ( and the Titan was patrolling those settlements ) and a map where a series of suspicious-looking decorative statues spring to life and attack the player at varying intervals.

The story itself feels a bit like it’s meandering, but it gets the job done.

Otherwise, the game is manifestly recognizable as Age of Mythology.

Aside from a few new maps, in fact, there really isn’t that much that’s all that new about it, although the sunset reflecting orange and purple off the water is a nice touch.

A couple of new tunes are present in the soundtrack, but the difference isn’t really significant as the soundtrack is as unobtrusive as ever.

The Greeks, Egyptians, and Norse are all essentially unchanged, and that is okay-the original game was balanced finely enough that the earlier civilizations still have a place even as the new additions are noticed.